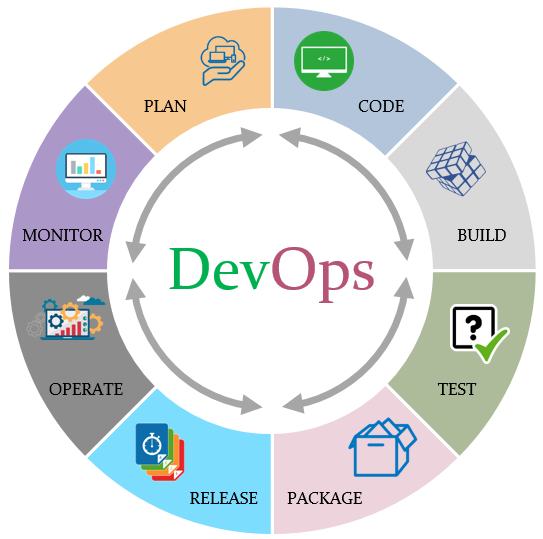 What is the DevOps model?

Software development is a complicated process including many steps. Its lifecycle determines the time for the project, investments, profit, etc. The more efficient the development process is, the bigger the profit you’ll receive.

DevOps services automate the big part of the routine processes and make them smoother. To have a more deep understanding, we need to plunge in history a bit. Before the DevOps model introduction, development teams used the Waterfall model. The common development team includes developers, Quality Assurance (QA) engineers, and IT Operations. Imagine three columns with tasks. First column for developers, second for QA engineers and third for the IT Operations. The developer has a task to write code, then it goes to the QA engineer for testing and then to the IT Operations for deploying. It looks like a clear line from column to column. But in reality, while the developer writes code, QA engineer has his/her own tasks and IT Operations maintain the whole infrastructure. When code is ready, both QA engineer and IT Operations need to stop current work and pay attention to the new code.

Thus, our three columns are always connected and mixed. This scheme looks like chaos and brings a lot of risks, problems and worries. That’s why the IT community decided to find another way and create the Agile manifesto and the DevOps model as a result.

There is the old myth about DevOps engineer as the combination of developers, QA engineers and IT Operations. Thus, DevOps methodology includes principles of three listed specialties. But DevOps isn’t about this combination. DevOps is an independent methodology.

DevOps approach modifies the software development by the next principles:

These principles make the software development cycle seamless and efficient.

Conclusion: is the DevOps the only efficient model?

There are a lot of approaches to software development. But we can definitely say the DevOps is the most efficient one. It is on the market for more than a decade and is becoming increasingly popular because it hasn’t any real alternatives. DevOps engineers continuously develop their skills and invent new tools, so we can say, the DevOps model has a pretty successful future.

If you want to implement this great methodology to your company, the most efficient way is to hire a dedicated DevOps team from a Managed Service Provider (MSP). Such teams have wide experience with different automation tools and they definitely will make your processes better.